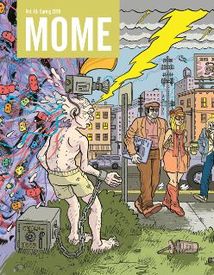 This issue's editorial claims that, with the publication of MOME 18, MOME has now published over 2000 pages of comics, and that this "may be a record for an English-language alternative comics anthology."  Who knew?  To start off the celebration we have Nate Neal's cover feature, the multi-layered and multi-levelled, "Neurotic Nexus of Creation."  This one should leave you with much to ponder, especially regarding its innovative formal qualities, but as well as for its worldview.  Of special interest to Copacetic customers is the latest message from the Cold Heat universe, brought to you by the combined powers of Ben Jones, Frank Santoro and John Vermilyea.  This feature is a vigorously rendered and sumptously colored tale of drugs, rock 'n' roll, sex, and gruesome horror.  Also in this issue we have:  an all-new Tim Lane tale, "The Passenger"; a surprise new Pip and Norton adventure from Dave Cooper and Gavin McInnes; "Burrow World," wherein Joe Daly does Mat Brinkman;  three short pieces by Nicolas Mahler; the third installment of Fuz & Pluck in "The Moolah Tree"; the second installments of both T. Edward Bak's WIldman – "A Barvarian Botanist in St. Petersburg," and Michael Jada & Derek Van Gieson's "Devil Doll"; a four-pager by Lilli Carré that had us thinking of old Rick Geary; the pastoral "Autumn" by Conor O'Keefe; more René French; and the Chris Ware homage, "The Jerk Machine," by Jon Adams.  MOME!