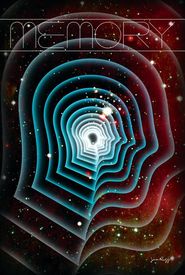 This 186 page anthology of comics and illustration based (to varying degrees) on the theme of human memory is the brainchild of Pittsburgh-based artist and publisher, Jeremy Baum.  Made possible by a successful Kickstarter campaign, this project was steadily piloted through the self-publishing obstacle course by Captain Baum, who made the trip from conception to publication in very good time.  Memory contains full color, duotone and black & white work of 50 creators from Pittsburgh and beyond and is notable for containing the work of many international contributors, including  Jelena Dordevic (Serbia),  Nicolò Pellizon & Daniele Giardini (Italy), Diego Tripodi & Diego Simone (Argentina),  Tim Molloy (Australia), Sara Skogsberg (Sweden) and César Sebastián Diaz (Spain).  Numbering among the contributors as well are household names (well, among hardcore indy-comics households, anyway) such as Eric "Tales to Demolish" Haven, Hans "Chrome Fetus" Rickheit.  Pittsburgh is very much in the house in Memory, represented most notably by Jim Rugg, who provided the cover illustration, along with too many to mention here, including Shawn Atkins, Jessica Heberle, Nick Marino, Daniel McCloskey, Nate McDonough, Steph Neary, Tom Scioli, Nils Skeletonballs, Julie Sokolow (whose 10-page contribution is the most formally inventive of the collection and a real stand out), Brenna Sydel, Copacetic's own Bill Boichel, and, of course, Jeremy Baum himself, whose 14 page collaboration with Morgan Ritchie-Baum, "Creation Story", a tale of SF-tinged occult mysticism executed in detailed pen & ink with pantone colors, is the collection's longest.  The work in Memory really runs the gamut in style and story, ranging from oblique and abstract to straightforward and traditional.  Visit the Kickstarter page for more info, and be sure to check out the 9 updates, which provide additional information as well as tons of artwork by the contributors.  In addition, the contributor listing at the back of the book includes URLs for each, so readers can easily further engage in the work of any and all involved in this project.

This item belongs to the categories: Anthologies, Small Press Comics, Gift Catalogue, Made in Pittsburgh
You may also enjoy these related titles: