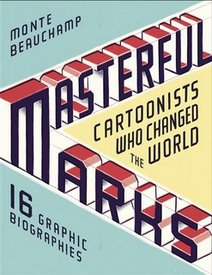 
edited by Monte Beauchamp
comics by Drew Friedman, Dan Zettwoch, Mark Alan Stamaty, et al
It's hard to gauge what's in store when you first espy a copy of Masterful Marks, so we're going to let you know that, while in the world of comics you often can judge a book by it's cover, this is one of those books that fits the old adage, as between its staid and stolid coversis a riot of colorful comics homages to the giants of comics, by a great assemblage of currently working cartoonists.  Among the pieces you will find here are Mark Alan Stamaty on Jack Kirby, Beauchamp and Ryan Heshka on Jerry Siegal and Joe Shuster, Dan Zettwoch on Tezuka Osamu, Denis Kitchen on Dr. Seuss (and yes, for those of you who don't know, he started out doing comics), Peter Kuper on Harvey Kurtzman, and Drew Friedman turns in what may be the best comics work of his career with "R. Crumb & Me."  And there's plenty more.  While we would take issue with Beauchamp's decision to include comics-packagers/promoters like Walt Disney and Hugh Hefner in the collection, presumably for commercial reasons, given their greater name recognition with the general public, we're not going to let it detract from our enjoyment of the bulk of the book.  So, make sure to pry open this one when you see it, and take a look.

This item belongs to the categories: Anthologies, Gift Catalogue
You may also enjoy these related titles: