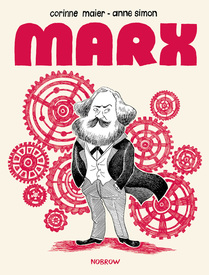 The most important figure in the history of communism, which ended up becoming a core component of the central narrative of the 20th century, Marx gave his name to Marxism, and in the process became a figure simultaneously revered and reviled, worshipped and feared, respected and denigrated; in short, one of the most controversial figures in history.   Yet, he was also a mere mortal, who grew up, fell in love, and had a family.   While, naturally, gaining a full appreciation of his life and work would involve years of study, now, in this full-size, full color, 56 page, hardcover comics biography that is equal parts entertaining and educational, readers will have a chance to get a feel for his life and work, gain an appreciation for his accomplishments and his place in history.  Yes, learning can be enjoyable.... in comics!

This item belongs to the categories: Graphic Novel, History & Biography, International
You may also enjoy these related titles: