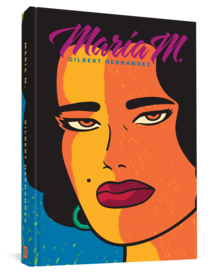 Well, instead of the long awaited Maria M., Book Two, we get...  Maria M., the compete, all-in-one, single-volume hardcover edition.  So, sorry to all those who bought Book One and now have to get it again in this complete volume... but, this one – containing both Books One and Two – is priced only seven dollars more* than Book Two alone was priced (before it was cancelled and replaced with this single volume).  Such are the exigencies of publishing.

All that said, Maria M. is a a book of multiple layers.  To anyone simply picking it up and reading it, Maria M. will be 232 pages of rock 'em, sock 'em comics pulp fiction, loaded with the sex and violence that are the staple of this genre.  However, to longtime Love and Rockets readers, it is also, ostensibly, a B-movie retelling of the "true story" of Luba's mother, María Inclán – who is also the mother of Petra and Fritz, the latter of whom is the "star" of this movie, playing here her own mother.  The "true story" referred to is the story that Gilbert originally told in Poison River, one of Gilbert's most complex works, which was originally serialized over the course of several years (1989 - 1992) in the pages of Love and Rockets #s 29 through 40, and currently availble in Beyond Palomar.  Additionally, there have been references to Fritz playing her mother in more recent issues of Love and Rockets, so one could then go back, reread Poison River and then search for those references to this "movie" of Maria M. made by – or about – Fritz over the last decade and then use those to inform a back story for this work... yes, it's kind of complicated – but it's entirely up to the reader how far to go down this particular rabbit hole.   Suffice it to say that, no matter how you slice it, it makes a great read.