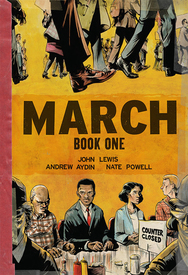 We're a bit late in bringing to your attention this graphic memoir that was released to coincide with the fiftieth anniversary of the March on Washington (but to make it up to you, we're offering it at a special price).  March brings readers a vivid comics account of Lewis's "lifelong struggle for civil and human rights, meditating in the modern age on the distance traveled since the days of Jim Crow and segregation... Book One spans Lewis's youth in rural Alabama, his life-changing meeting with Martin Luther King, Jr., the birth of the Nashville Student Movement, and their battle to tear down segregation through nonviolent lunch counter sit-ins."  Some readers may be curious as to why Lewis chose to tell his story in comics form.  It seems that his decision to do so is rooted – at least in part – in the inspiration he and other student activists drew from the 1958 comic book Martin Luther King and the Montgomery Story (This is the same comic book that was the subject of an exhibit at The Toonseum in 2010).

This item belongs to the categories: Gift Catalogue, History & Biography
You may also enjoy these related titles:

Save It for Later

Sounds of Your Name