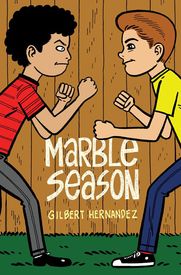 What's this?  Another new graphic novel by Gilbert Hernandez, a mere month after Julio's Day?  Believe it or not, yes! Billed as a "semi-autobiographical" tale, Marble Season takes readers back to the 1960s for a look at a pop culture immersed California childhood based in part – or at least strongly informed by – Beto's (and, of course, that of his siblings) tender years.  Pop tunes on radio and record, TV shows, and, of course, comic books are here, along with neighborhood kids and their marbles.  This book is also notable in being the first book by either Hernandez hermano published by D & Q* (although it is not the first to be released by a Canadian publisher, that honor going to the first four issues of Mr. X, published, and then collected, by Vortex, nearly thirty years ago).  In creating Marble Season, Gilbert has worked with subtlety and care to capture a wide spectrum of childhood dynamics:  how one interaction leads to another, often seemingly unrelated, which in turn leads to another in a haphazard fashion to which there is no apparent rhyme nor reason, yet which irrevocably forms the adult the child grows into.  While Marble Season is very much a boys' tale, there are plenty of girls in evidence, and even as there is no denying that the girls of Marble Season are seen primarily in their relation to boys, Gilbert is a master of feminine nuance, and in his revelatory lines on paper, as much significance can be conveyed in a girl's fleeting glance as in a boy's epic battle.

* Although we are now offering the UK edition from Faber, it is completely identical to the D & Q edition, with the exception of the price box and logo; they were almost certainly printed together at the same time.