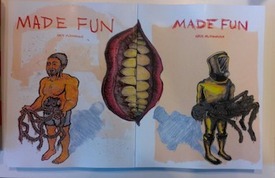 And as we're on the subject of Made in Pittsburgh graphic novels, now would be a good time to draw your attention to the latest – and greatest (so far) – from Pittsburgh-cartoonist-about-town and Copacetic stalwart, Nate McDonough.  Made Fun is a full-size, 92 page descent into the maelstrom.  Two intertwining narratives lock the reader in a spiral between two worlds.  Whether the division can or should be perceived as being between the conscious and unconscious, between waking and dreaming, or between something else altogether is, ultimately, immaterial to the appreciation of the drama delineated here, which is of the existential struggle of making sense of an absurd universe.

This item belongs to the categories: Graphic Novel, Made in Pittsburgh, Small Press Comics
You may also enjoy these related titles: