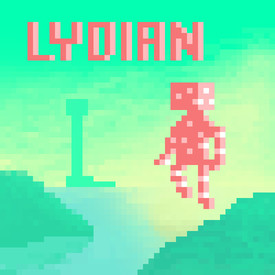 Sam Alden's new work is quite a departure.  Long time readers, acculturated to his swift and sure pencil renderings may be startled to open this work and find it filled with super-low-resolution pixel renderings (at least one of his pixel art works has previously seen print, however, in the pages of S! #18).  Upon reflection, however, Lydian can be seen as an extension of the direction Alden was moving into with his last work, Hunter, which was a piece that immersed the reader in a quasi-videogame world.  Both Hunter and Lydian are full color works and both employ constraints:  Hunter is hand drawn with marker, employing the constraint of being a wordless comic; Lydian is dependent on a highly constrained computer rendering that imposes an extreme limit upon the depiction of character expression as a result of being at the limit of pixelation, and thus forces the reader to be highly reliant on the dialogue to infer character actions, expression, moods and emotions.  These two approaches may be seen as the inverse of each other.  Plenty of food for thought, regardless.  Our take away is that Alden is probing the constraints placed on consciousness in the ever more computer-assisted / computer-dependent environment in which he and his peers find themselves, and reporting back in comics form.

The Man Who Dances In the Meadow