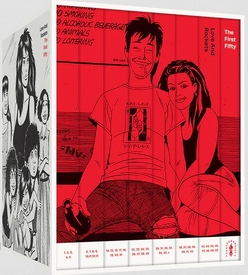 Love and Rockets is the series that started it all, the ink and paper container for the comics without which The Copacetic Comics Company would not exist.  Beginning with an ending – BEM, the definitive deconstruction of what was holding back the medium of comics, preventing it from realizing its full potential –  and then... 40 years of demonstrating the tremendous capacity of comics as a form of personal expression, being the primary driver of the establishing the strong, long term bonds between the alternative comics and alternative music scenes – and so much more – and in the process transforming the medium.

Here, in this 40th anniversary box set of bound facsimiles of the first fifty issues – the complete first volume, originally published by Fantagraphics from 1982 to 1996 – is an opportunity both to (re)expreience and preserve for posterity the orignal experience of the series that changed comics.  This is a publication to take your time with, to savor.  Considering that the original comics it collects and (re)presents took well over a decade to create, the longer you take, the more time you spend with it, the closer the reading experience will be to the original.

"Painstakingly recreated in issue-by-issue facsimile, this boxed set includes every cover, comics page, and letter column (even advertising!) in seven hardcover volumes. An eighth volume densely collates selected essays, reviews, and profiles that appeared in the popular (and unpopular) press between 1981 and 1996, along with over 100 pages of additional, rarely-seen comics from the period by all three Brothers, plus dozens of book and magazine covers – a virtual history of the growth of Love and Rockets and the simultaneous rise of the literary comics movement of which they were exemplars and trailblazers."

IMPORTANT NOTE TO OUR INTERNATIONAL CUSTOMERS:  Because of this item's weight, a follow on surcharge – in ADDITION to the already applied shipping charges – will be applied to any order from out of the USA, ranging from $25 for Canada to over $100 for Pacific Nations (Australia, Japan, etc.).

This item belongs to the categories: Classic Comics Collections, Collections, Copacetic Select, Gift Catalogue, Graphic Novel
This item is part of the series: Love and Rockets
You may also enjoy these related titles:

Children of Palomar and Other Tales