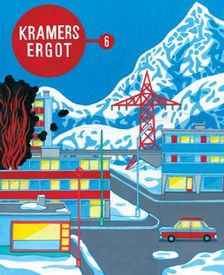 Edited, as always, by Sammy Harkham -- this time around with an assist by co-publisher Alvin Buenaventura -- this now seemingly biennial publication continues to live up to the promise made with the fourth and fifth volumes.  The format follows that of the last volume:  a flat matte finish (this time sans texture) flexi cover fixed to a sturdy Smythe sewn binding that holds the contents firmly in place.  And what contents!  Many of those talents that readers have come to associate with Kramers Ergot are here again, and have submitted work that is as engaging as ever.  Sammy Harkham, C.F., Paper Rad, Marc Bell, Souther Salazar, Ron Regé, Jr., Matthew Thurber, Dan Zettwoch and Elvis Studio are joined by Vanessa Davis, Tom Gaud, Martin Cendreda, Bald Eagles and a handful of others.  Also,  KE Alum Gary Panter finds himself under the same covers as former fellow Raw artist, Jerry Moriarty, who is given plenty of space to present his idiosyncratic Hopperesque visions for the first time (we've seen) in many years.  In addition, with this issue Kramers Ergot adds a curatorial component to its offerings for the first time, as readers are given a rare look at two great historical figures of the comics world:  we get a healthy sampling of a late sketchbook by the Dutch comics artist, Marc Smeets, which is preceded by "an incomplete appreciation" by Chris Ware; and an amazing reproduction of the early and highly influential manga, Norakuro by Suiho Tagawa.  All in all, it seems once again to be an essential read for anyone involved in the contemporary comics scene.

This item belongs to the categories: Copacetic Select, Anthologies
This item is part of the series: Kramers Ergot
You may also enjoy these related titles:

The Hand of Black and Other Stories