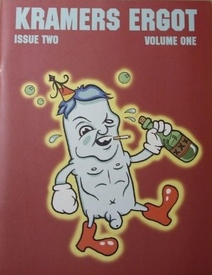 A heretofore hidden cache of the first three issues of this seminal anthology have just been unearthed and we managed to obtain a share of them, which we are now offering for sale at their original prices (or less!).  These three issues have been selling for high multiples of these prices for quite awhile, preventing the many who have to worry about things like eating and paying rent from being able to get their hands on copies – until now!  The first two issues are more-or-less standard B & W comic books; #1 on newsprint guts with a cardstock cover, #2 on white (mando?) stock with a cardstock cover that is slightly lighter than that of the first issue; both are 48 pages.  Each features early work by Harkham, along with his now largely forgotten compatriots David Brook, Lucas Quigley and Justin Howe (who lives on as a blogger). With the third issue, the format graduates to a 128-page squarebound trade paperback format and features a strong variety of early work by Anders Nilsen, Ben Jones, Joe Grillo, Hans Rickheit, Sara Varon, Zack Soto, Kathleen Lolley, Mark Burrier, and others, along with, of course, Harkham himself.  Anyone interested in learning more about these issues should take a moment to read Joe Mcculloch's recently posted TCJ review written to draw attention to the discovery of these very issues.  Still at the original cover price!

This item belongs to the categories: Small Press Comics, Anthologies
This item is part of the series: Kramers Ergot
You may also enjoy these related titles: