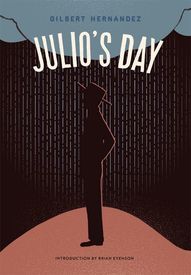 Gilbert's long awaited return to the multi-generational saga form that he made his own in Palomar is here, and we are happy to report that it is a book that is as rewarding as it was long in coming.  We are given a 20th century spanning tale of five generations of the Reyes clan that centers on the titular Julio and precisely matches the span of his life.  Taking place in a nameless rural town that is presumably located somewhere in southern California, Julio's Day takes its readers through five wars and generation defining events like the Great Depression and The Sixties as they are experienced at the fringes.  Julio's Day is most notable, however, for what is happening below the surface of the twentieth century, at the fringes as well as at the center:  the evolution of personal, private, public and political attitudes towards the physical expression of love between men, from tragically repressed inversion, through stoically denied homosexuality and finally to openly celebrated gay identity.  Gilbert ingeniously leverages the unique power of comics' visual language to at first deny, then elide, and finally allow the reader to witness sexual activity in a manner that is analogous to the gradual shift in attitude of the American public towards this integral part of the spectrum of human behavior, as, through the course of the century, it developed from hiding to seeing.