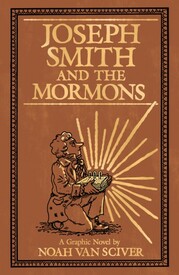 One could say that Joseph Smith and the Mormons, a 464-page, hardcover, full color, historical-epic/biography in comics form of the life of Joseph Smith and the founding of the Church of the Latter Day Saints – aka the Mormons – is the work of a lifetime.  It is the fruition of years of self-reflection and research followed by even more years of writing and drawing (and then editing).  Noah Van Sciver was brought up in the the Church of the Latter Day Saints, but then fell away from it – along with his mother, and some (but not all) of his siblings – after his parents divorced.  His father stayed in the church.  These biographical facts shed some light on the particular contours of the shape and form of his recounting of this saga  – and a saga it is.

In many ways, Noah's saga of the Mormon Church shows it as that of a peculiarly American growth, during the first half of the nineteenth century, of a stray seed of Christianity planted in American soil.  So much about the rise of the Mormons reflects the American character, and Noah very pointedly ties the story to the land of America itself; the glory and the mystery of the seemingly endless, untrammeled landscape, as well as its transformation by the industrious workings of this new breed of people, the Americans.

Noah's storytelling here excels at revealing character and motivation through implication, leaving final judgements to the reader.  In these pages, Joseph Smith is simultaneously hidden and revealed, with the character of his revelation hidden to almost the precise degree that his personal character is revealed. This at times has the effect of putting the reader in the position of a spectator witnessing a highwire balancing act, wondering whether or not Noah will make it all the way to the end without tipping his portrayal one way or the other.  By the end one is left with the sense of a religious revelation emerging from personal need.

Joseph Smith and the Mormons provides an additional dimension in that the narrative arc of the rise of the Mormon Church as here portrayed can be seen as a template for the countless American corporations that began emerging half a century later:  The charismatic "visionary” leader with a new idea/concept/product that meets an untapped market demand who employs the force of his (as it’s nearly always a man in these sagas) personality to push through his idea/concept/product and get it accepted in the marketplace, followed by an unexpected level of success which bolsters the leader/visionary’s status and seems to grant them a surety of continual leadership, resulting in the leader/visionary’s losing sight of their humanity and fallibility which leads in turn to megalomania and thoughtless decisions that bring about dissatisfaction among their board of directors/workforce/followers/customers that then necessitates the elimination/sacrifice of the leader – in some way, shape or form – in order to “save the company”  – or, in the primal case here, save the church – at which point a more even-headed, managerial type member of the leadership team  – here, Brigham Young – steps into the leadership (aka CEO) role to steady the company and get it back on track.

This linkage is made manifest in the ways in which Smith’s life and the genesis of the church intersect with American capitalism.  As the church gets underway Smith supports himself by running the dry goods store at the center of the community.  The church also attempts to set up a bank – in order to finance its operations, specifically the construction of its physical church – but one substituting faith for a state sanctioned charter (unsurprisingly, this doesn’t end well); and they even set up their own militia at one point, with Smith anointing himself as the general!  So, here in the pages of Joseph Smith and the Mormons, readers will, if they dig, find themselves in possession of a revelation of the linkages between religion, business, finance and the military – all ring-fenced by a patriarchal order that prioritizes the masculine prerogative – that lie at the core of the American character.  This may well be the true revelation offered by the Golden Plates.

My Hot Date (and Other Embarrassments)

The Complete Blammo, Volume One