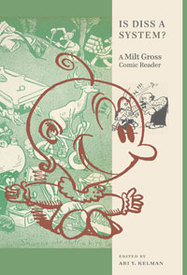 This is a swellegant hardcover from New York University Press – complete with tranlucent dust jacket and 50 page introduction by Ari Kelman, an American Studies prof at UC Davis.  This book is mostly composed of Gross's prose humor, replete with Yiddish dialect (that will likely remind some readers of Krazy Kat's – or "ket's" – dialogue) but there are over a hundred cartoons and/or comics scattered throughout this volumes 300 pages, making for a great introduction to this multifaceted talent.

And here's the NYU Press info:

Milt Gross (1895-1953), a Bronx-born cartoonist and animator, first found fame in the late 1920s, writing comic strips and newspaper columns in the unmistakable accent of Jewish immigrants. By the end of the 1920s, Gross had become one of the most famous humorists in the United States, his work drawing praise from writers like H. L. Mencken and Constance Roarke, even while some of his Jewish colleagues found Gross’ extreme renderings of Jewish accents to be more crass than comical.

Working during the decline of vaudeville and the rise of the newspaper cartoon strip, Gross captured American humor in transition. Gross adapted the sounds of ethnic humor from the stage to the page and developed both a sound and a sensibility that grew out of an intimate knowledge of immigrant life. His parodies of beloved poetry sounded like reading primers set loose on the Lower East Side, while his accounts of Jewish tenement residents echoed with the mistakes and malapropisms born of the immigrant experience.

Introduced by an historical essay, Is Diss a System? presents some of the most outstanding and hilarious examples of Jewish dialect humor drawn from the five books Gross published between 1926 and 1928—Nize Baby, De Night in de Front from Chreesmas, Hiawatta, Dunt Esk, and Famous Fimmales—providing a fresh opportunity to look, read, and laugh at this nearly forgotten forefather of American Jewish humor.

“It is Gross’s good fortune, and ours, that a most recent generation of Americans has reclaimed him as its own or, at the very least, brought his talents to the fore once more. Is Diss a System? A Milt Gross Comic Reader is a case in point, a showcase of his many gifts. . . . In his championing of Milt Gross, Kelman assumes his rightful place as a cultural archaeologist of American Jewry’s vernacular culture. He belongs, in fact, to a new generation of American Jewish intellectuals who are determined to recover—and to celebrate—what their forbears had consigned to the attic or dismissed as a curiosity.’

“Milt Gross is a lost wonder of the American literary funhouse. A blessing on the head of Ari Y. Kelman for bringing him, roaring, back to mad and vivid life.”

—Michael Chabon, author of The Yiddish Policemen’s Union: A Novel

“Nearly thirty years before my birth, Milt Gross had already turned the kind of English that I heard every day into great and significant art, delighting kids like me as much as he offended the Pecksniffian alte kakers who sought to purge American Jewish culture of every trace of real Yiddish and real Yiddish life. Gross was the bomb under Molly Goldberg’s tukhes. Is Diss a System?, a book that needs to be spoken as much as it needs to be read, makes some of his best work available to an audience that might never have suspected what it’s been missing.”

“Is Diss a System? brings back Milt Gross with a bang. Artist, tongue-twisting language humorist, Gross was a great figure of American popular culture in the first half of the twentieth century, sadly forgotten . . . until now! Kelman has given us all a gift by selecting, annotating and celebrating a multiculturalism that rings with humor, humanism and a spirit we all need as much as ever. Hurrah!”

This item belongs to the categories: Classic Comics Collections, Special Sale
You may also enjoy these related titles: