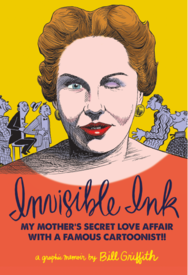 Bill Griffith, widlely heralded as a founding father of underground comics and late-20th century pop counter culture, primarily for his star creation, Zippy the Pinhead™, but also for his pioneering editorial contributions to the important comix anthologies Young Lust and, with Art Spiegelman, Arcade, has here, in the pages of this 200 page graphic memoir, told the story that he has been keeping to himself all these many decades.  This one's got a title -- well, subtitle, anyway -- that pretty much doesn't hold back the punch line; what was the big surprise for the author is fait accompli for all readers going in.  The reason for this is that there is so much more going on here than just a tell-all auto-bio comic; by getting this out of the way at the outset, it allows readers to focus on the wider world that is on display here.   Invisible Ink provides what may, in hindsight, be construed to be the key formative event in Bill Griffith's early life.  But, much more than that, this is the story of coming to terms with one's mother as an entirely distinct human being with a life -- and, crucially, an independent sexual agency -- of her own.  This is a remarkable achievement, and one that is fairly unique in the annals of comics – yet strangely appropriate, given the  Oedipal undercurrents present in so many comic book narratives.  While there is the obvious precedent of Alison Bechdel's Fun Home, Invisible Ink  charts plenty of fresh territory in the comics portrayal of the psychology of the child of a sexually independent adult parent whose core identity exists outside of the nuclear family.  And there’s more!  The setting is a key component here, not just the physical and concrete, but, especially, the cultural evirons take center stage here in the shaping of a life and mind.  Particularly, but not only, the New York City of the 1950s and early ‘60s and its suburbs.  Invisible Ink is a detailed portrait, a vivid recreation, of a time and place – and, crucially, a career, that of a real-life, jack-of-all-trades culture creator, who tried his hand at a wide variety of pop and pulp culture forms, but never strayed far from comics and cartooning – that once was but is now no more.  While Griffith has vividly brought his mother back to life in pen and ink, he has, perhaps, even more vividly recreated her paramour, Lawrence Lariar, and in so doing, has charted a path back to his personal past that simultaneously traces a comics lineage and draws a cultural history.  John Kelly has written a detailed review of the work on his Spooky Comics blog, HERE.

This item belongs to the categories: Gift Catalogue, Graphic Novel, Copacetic Select
You may also enjoy these related titles:

Nobody's Fool: The Life and Times of Schlitzie the Pinhead 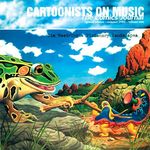