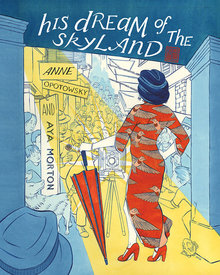 Back in print at last, courtesy Top Shelf Production, this epic graphic novel of nearly 300 pages in length remains in it's original oversize softcover form.  It is the product of a pair of Americans that had originally been issued by Gestalt Publishing of Australia in 2011(and so hard to come by here in the States).  Written by Anne Opotowsky and fabulously rendered by Aya Morton in a unique water color fashion, employing an Asian-inflected brushwork style with a muted, limited palette that excludes black line and hews to blue.  Set in early 20th century Hong Kong, specifically the Kowloon area, it follows the adventures of a young man, Song, as he sets out to explore the possibilities life has to offer.  Believe it or not, this mammoth tome is only the first volume of the Walled City Trilogy!  Anyone interested in learning more, should take a moment to read Paul Gravett's heavily illustrated review of His Dream, HERE.

His Dream of the Skyland