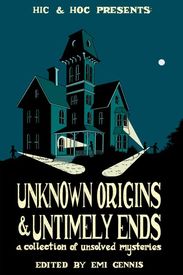 Despondent fans of the long gone and largely forgotten comics that focused on mysteries and legends, like Adventures into The Unknown, House of Mystery, House of Secrets, Journey into Mystery, Mysteries of Unexplained Worlds, Strange Tales, Tales of Suspense, Tales to Astonish, Unknown Worlds, and the many others that were for decades a central part of the comics firmament finally have a reason to rejoice!  Unknown Origins & Untimely Ends is an awe-inspiring anthology jam-packed with tales of the inexplicable.  The 32 stories by as many creators that fill this 180 page volume are each strange and unsettling in their own unique fashion and together make for an intensely engrossing read; no duds here!  Editor, Emi Gemmis has done a terrific job in assembling a wide ranging variety of talented artists, each with their own distinct style.  Contributors come from all over, from as close as Pittsburgh, PA (Nate McDonough) and as far away as South Australia (Owen Heitmann), and count among their ranks Evangelos Androutsopoulos, Sam Alden, Melinda Tracy Boyce, Box Brown, Nikki DeSautelle, Julia Gfrörer, Andy Glass, Jenn Woodall, and almost two dozen more.  We can pretty much guarantee that these tales – which the introduction states are "all true... (even if) many are also unbelievable" – will have readers heading to the internet more than once in an attempt to assuage the gnawing mystery eating away at their inherent rationality, and feeling a (perhaps unwanted) kinship with Shakespeare's Hamlet, who succinctly summed it all up when he said –

There are more things in heaven and earth, Horatio,
Than are dreamt of in your philosophy.
- Hamlet (Act 1, Scene 5)
This item belongs to the categories: Anthologies, Small Press Comics, Copacetic Select, Gift Catalogue
You may also enjoy these related titles:

Cannabis: The Illegalization of Weed in America 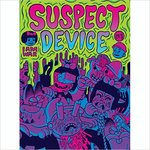