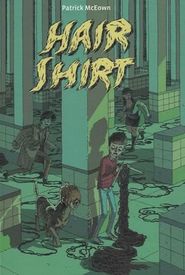 This work was released in French by Gaillimard in 2010, then in the UK in 2011, and now it has at last made its way into the North American distribution system and onto the Copacetic new releases table.   Published bySelfMadeHero, the same folks who brought us Nao of Brown,  Hair Shirt is another finely printed, well produced work by a talented artist given free reign to follow their particular muse and see where it leads them.  Patrick McEown is a Canadian cartoonist who has been working since the mid-80s (anybody remember Aircel's Samurai?) and may be best known for his work with Matt Wagner on Grendel.  While there's a hint of his pal Dave Cooper in McEown's inking, he has clearly established his own voice in comics.  Nowhere is this more true than in the distinctive palette of his coloring, which is amply on display here, in the primarily nocturnal settings of Hair Shirt's action.  McEown's muse has led him to to produce a sensually rendered account of youthful sexual exploration and discovery in a nameless Canadian "City" under the cover of night.  Now on SPECIAL!