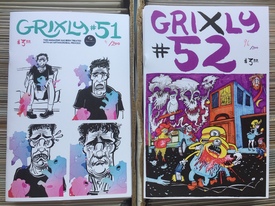 Issue #51 is devoted entirely to a new ongoing saga*, “Longboxes”, wherein readers are, for the first time in comics history (maybe?) taken deep behind the scenes of the arcane world of comic book dealing.  Here, in the pages of Grixly is a comics document that at long last dares not just to go behind the façade of the “wall comics” but to knock them to floor and then rip out the drywall supporting them to reveal the hidden human plumbing that’s been there all along, conveying, cycling and recycling old comic books from one collection to another.

In issue  #52, “Longboxes” manages to occupy roughly a third of the issue, but can’t keep longterm Grixly obsessions from clawing through, including intrusive thoughts, pent-up anger, sarcasm, prophesies, horrific violence – alone and in various combinations.

*The "Longboxes" saga actually begins with a prologue in Grixly #50 (ed.)

This item belongs to the categories: Handmade, Made in Pittsburgh, Small Press Comics
This item is part of the series: Grixly
You may also enjoy these related titles: