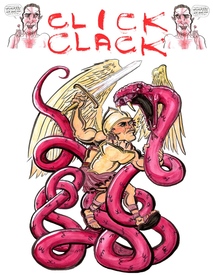 With it’s 34th issue (why 34th? go figure…) McDonough has taken his long-running, anything-goes, one-man comics anthology to new heights (and new widths) in this, the first magazine-sized issue of Grixly.  In recognition of the distinction this issue bears from the previous 33, it has been assigned its own sub-title.  Here, in the 32  8 1/2" x 11” black & white, monochrome and full color pages of Click Clack, we are provided with a veritable catalogue of comics and cartooning styles, story forms, genres, tropes, color schemas and more; from single image caricatures and grotesqueries in the tradition of Basil Wolverton, to short, one to six panel gag strips, auto-bio comics, faux auto-bio comics, and much else that doesn’t fall into neat categories.  In a sort of reverse of the Pekar/Eichorn paradigm of multiple artists adapting a single writer’s auto-bio tales, there are here several comics adaptations of various friends’ auto-bio stories, all drawn by McDonough, who brings out their individual qualities.  There is an illuminated concert review of a show by Godspeed You Black Emperor.  The “centerfold" is a haunting adaptation of the darkest portion of Mark Twain’s The Mysterious Stranger, which takes on an added layer of meaning by being positioned -- and labeled -- as the centerfold, demonstrating that McDonough knows what he’s doing here.  There are some engaging stream of consciousness pieces of varying lengths.  There are several of the monochrome color pieces that some readers may have come across when they originally appeared on the Comics Workbook Tumblr, for which they were prepared.  There is a series of single-panel observational / anecdotal comics.  There is an appreciation of a local group of comics creators that doubles as a meditation on the parallels between cartoonists and cowboys.  All is seasoned with humor of varying degrees of bleakness along with the occasional dash of just plain bleakness, thrown in for good measure.  There are so many comics here that they are literally crammed together to fit them all in.  The value oriented comics reader is hereby assured that one would be hard pressed to find more comics for a fin anywhere else.  And, to top things off, Grixly #34 has been published in a hand-numbered edition of 200.

This item belongs to the categories: Copacetic Select, Handmade, Made in Pittsburgh, Small Press Comics
This item is part of the series: Grixly
You may also enjoy these related titles: