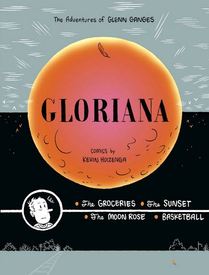 Here it is:  the best selling work (when combining the sales of its two previous incarnations) in the history of The Copacetic Comics Company has finally been published in a richly deserved, shelf-worthy – and, more to the point, library friendly – permanent edition.  This 120 page hardcover is printed on archival white stock and presents the complete original work along with bonus pages documenting its history.  Originally self-published in 2001 as Super Monster #14, "Gloriana" was the culmination of Huizenga's development as an artist, knitting together all his strengths as a comics theoretician, cartoonist and graphic explicator to produce a startlingly original work that garnered considerable critical acclaim and eventually brought him to the attention of both Fantagraphics (who have to date published four issues of his Ignatz series, Ganges) and Drawn & Quarterly, who commissioned him to lead off their Drawn & Quarterly Showcase series, and have subsequently collected and repackaged the most significant portion of his self-published and anthologized work, including this, which was first reissued by D&Q as the second issue of Or Else.  Huizenga has dedicated himself to advancing the formal capacities of comics, forging new syntheses by consistently applying fresh perspectives to comics from a wide variety of sources; perhaps most dramatically so here, in Gloriana.  The fact that more Copacetic customers own this work than any other won't stop us from continuing to do our best to continue to bring it the attention of comics readers everywhere – this means you!  We're even offering a "stragglers' special" for those latecomers to this amazing work.