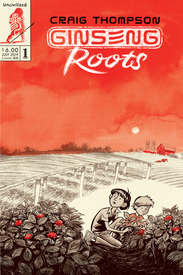 Fifteen years after deciding, in youthful rebellion against the bite-sized, stretched out serialization of comics, to release his graphic novel Blankets in its entirety, Creaig Thompson unleashed what was up to that point the largest/longest, all-new, previously unpublished/unserialized, single volume work of comics in the history of (American, at least) comics* – and then following that with the even lengthier, and also unserialized, Habibi – Thompson has done a 180° and is now, with Ginseng Roots, returning to the 32-page comic book format in which he first discovered comics in his childhood – the childhood that is revisited in most of the 32 pages in this first issue – for a series of what is expected to be 12 issues, but might, it is hinted at in Thompson's introductory text, end up being more.

Beautifully drawn, and sharply printed in black and white and red on high quality, heavyweight newsprint, readers can look forward to Craig Thompson integrating explorations of Chinese calligraphic traditions in a manner akin to – but definitely different from – his weaving in of Arabic calligraphy and the geometirc patterns of Islamic art into the fabric of Habibi.  While most Americans (rightly) associate Ginseng with China, many are unaware that America has been exporting ginseng to China since 1784 – not long after declaring independence from England – and that the ginseng grown in Marathon, Wisconsin which is at the center of this story, is highly prized in China for its unique flavor.  It's safe to say that there will be plenty to look forward to in this series, and a lot of time to look forward through, as it will likely be two years or more before it's done.

*(Had anyone anywhere ever before dropped a close to 600 page work of comics – none of which had previously appeared anywhere – in a single go?  If anyone knows of a prior example of this magnitude, please let us know.)

This item belongs to the categories: standard pamphlet comic book
This item is part of the series: Ginseng Roots
You may also enjoy these related titles: