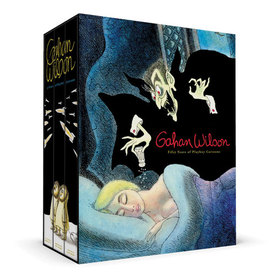 "OVER ONE THOUSAND CARTOONS SPANNING 50 YEARS OF A LEGENDARY CAREER

Fifty-one, to be exact, but let’s not quibble. Gahan Wilson is among the most popular, widely-read, and beloved cartoonists in the history of the medium, whose career spans the 2nd half of the 20th century, and all of the 21st. His work has been seen by millions — no, hundreds of millions — in the pages of Playboy, The New Yorker, Punch, The National Lampoon, and many other magazines; there is no telling, really, how many readers he has corrupted or comforted. He is revered for his playfully sinister take on childhood, adulthood, men, women, and monsters. His brand of humor makes you laugh until you cry. And it’s about time that a collection of his cartoons was published that did justice to his vast body of work.

When Gahan Wilson walked into Hugh Hefner’s office in 1957, he sat down as Hefner was on the phone, gently rejecting a submission to his new gentlemen’s magazine: “I think it’s very well-written and I liked it very much,” Hefner reportedly said, “but it’s anti-sin. And I’m afraid we’re pro-sin.” Wilson knew, at that moment, that he had found a kindred spirit and a potential home for his cartoons. And indeed he had; Wilson appeared in every issue of Playboy from the December 1957 issue to today. It has been one of the most fruitful, successful, and long-lived relationships between a contributor and a magazine, ever.

Gahan Wilson: 50 Years of Playboy Cartoons features not only every cartoon Wilson drew for Playboy, but all his prose fiction that has appeared in that magazine as well, from his first story in the June, 1962 issue, “Horror Trio,” to such classics as “Dracula Country” (September 1978). It also includes the text-and-art features he drew for Playboy, such as his look at Madame Tussaud’s Wax Museum, his take on our country’s “pathology of violence,” and his appreciation of “transplant surgery.”

Wilson’s notoriously black sense of comedy is on display throughout the book, leaving no sacred cow unturned (an image curiously absent in the book), ridiculing everything from state sponsored executions to the sober precincts of the nouveau rich, from teenage dating to police line-ups, with scalding and hilarious satirical jabs. Although Wilson is known as an artist who relishes the creepy side of modern life, this three-volume set truly demonstrates the depth and breadth of his range — from illustrating private angst we never knew we had (when you eat a steak, just whom are you eating?) to the ironic and deadpan take on horrifying public issues (ecological disaster, nuclear destruction anyone?).

Gahan Wilson has been peeling back the troubling layers of modern life with his incongruously playful and unnerving cartoons, assailing our deepest fears and our most inane follies. This three-volume set is a testament to one of the funniest — and wickedly disturbing — cartoonists alive."

Originally priced at $125.00, Fantagraphics was evidently over-optomistic in estimating how many would buy this set, and so subsequently reduced their asking price to $75.  Here at Copacetic, we've gone one step further and cut that sale price in half.  Making this massive, slipcased, three volume,  over-size box set containing over 1000 Gahan Wilson cartoons in 942 pages an incedible deal!

This item belongs to the categories: Classic Comics Collections, Collections, Gift Catalogue
You may also enjoy these related titles:

The Best of Gahan Wilson