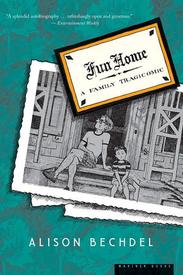 (softcover edition) Well, it's hard to imagine that any Copacetic customers missed this one the first time around, but you never know.  There may be a few of you out there lurking in the shadows who have been patiently waiting to pounce on the softcover once it arrives.  Well, if so, then those of you who did will be happy to know that your wait is over.  Now available in softcover is the most heralded comics memoir since... well, ever (yes, there's Maus, of course, but, properly defined, it isn't really a memoir).  We've long been fans of Ms. Bechdel's Dykes to Watch Out For, and we gave Fun Home an enthusiastic review as soon as it was published, but even we were surprised by how this book took the country by storm.  According to one of the many back cover blurbs, Fun Home was made the "Best Book of the Year" by no less than 23 major newspapers, including The NY TImes, The LA Times, The Times (London), The Guardian (UK), and even Time and People magazines!  It seems like people were lining up to sing the praises of this book.  And well it should be.  Our surprise -- and a quite pleasant one it is, we hasten to add -- is that a work of comics dealing with an inter-generational saga centered on gay and lesbian sexual identity would be the recipient of such accolades.  Times they (still) are a'changing, indeed.

And, now, believe it or not, Fun Home has been turned into a Broadway musical of all things -- but you knew that already.  What you may not know is that Bechdel executed a small comics piece about her reaction to this, HERE.

This item belongs to the categories: Graphic Novel, Copacetic Select, Gift Catalogue
You may also enjoy these related titles:

The Secret to Superhuman Strength