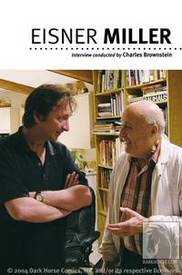 Anyone familiar with the history of film criticism knows of its most famous interview:  Hitchcock/Truffaut, in which the younger acolyte turned successful auteur in his own right -- Francois Truffaut -- interviewed the grand master of cinema -- Alfred Hitchcock.  The interview was released in a large illustrated volume which has been continuously in print for over thirty years.  Well, now the world of comics has an almost, but not quite identical -- as it is closer to a dual interview of the pair by Charles Brownstein -- equivalent in this volume. Eisner/Miller presents the younger acolyte turned successful auteur in his own right -- Frank Miller (although, in relative terms, Miller has been far more succcessful and influential than Truffaut) -- interviewing the grand master of Comics -- Will Eisner.  And this interview has now been released by Dark Horse in a thick illustrated volume.  Only time will tell how long it remains in print, but we do know one thing for certain:   it's an instant classic!

The Life and TImes of Martha Washington in the 21st Century