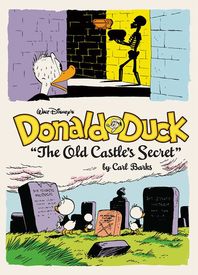 What more can be said about the genius of Carl Barks?  It towers over the landscape of comics history like the statue of Duckburg's founder, Cornelius Coot (erected by Uncle Scrooge in "Statuesque Spendthrifts" from Walt Disney's Comics and Stories #138; collected in A Christmas for Shacktown), towers over that fair city.  The title tale of this latest volume in the 15 year project to collect the entirety of Barks's Disney oeuvre, "The Old Castle's Secret" is a classic book-length tale of eerie mystery that was originally presented in Four Color #189, published in the summer of 1948, that provides the first fleshed out iteration of Uncle Scrooge (get a headstart on this tale by checking out this 20 page PDF preview).  Also on hand in this volume is the equally classic "Sheriff of Bullet Valley" from Four Color #199 along with eleven Walt Disney Comics and Stories ten-pagers, each and every one a gem.  In addition, this volume is especially noteworthy for including the first ever English language reprint of the original 1948 version of "Darkest Africa" which was published as the twentieth issue in the "giveaway" series,March of Comics.  Only the 1982 version, redrawn by Dutch artists Daan Jippes and Dick Vlottes, that had been altered at the request of American editors to tone down the degree of racial caricature present in the original has seen print in the intervening 65 years.  While present in only a handful of panels, the images of African natives that are on display here are harshly stereotypical and will doubtless be offensive to many – especially those of the cannibals, that, mercifully, appear in only two panels.  That said, as always in the highly moral Barksian universe, the narrative portrayal of these same African natives shows them in a relatively positive light.  Barks shows one group of natives sending news via the "jungle telegraph" of the talking drums, providing long distance communication that would otherwise be unavailable to Donald and his nephews (preceding James Gleick's characterization of the talking drums as the oldest form of telecommunication in his latest book, The Information, by over six decades).  Even the frightening cannibals are merely pawns in the evil machinations of the villainous Professor McFiendy, a character that Barks uses to demonstrate the illusory nature of the respectability conferred merely by education and position, showing here – as he has elsewhere – that such "respectability" in no way assures behavior deserved of the respect supposedly so conferred; a corollary in the true moral of the tale, which is that real respect can only be earned by responsible behavior.

This item belongs to the categories: Classic Comics Collections, Collections, Copacetic Select, Gift Catalogue, Kid Friendly
This item is part of the series: The Carl Barks Library
You may also enjoy these related titles:

Donald Duck Box Set: Lost in the Andes and Trail of the Unicorn