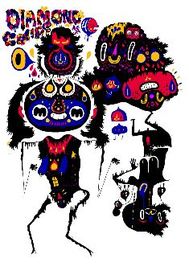 Edited by Jason Leivian and published by the fine folks at Floating World Comics – also located in Pittsburgh's west coast sister-city, Portland, OR – Diamond Comics has nothing whatsoever to do with the comics distribution behemoth of the same name (except, perhaps, a satiric jab), but is, rather, an excellent tabloid newspaper comics publication that provides a refreshingly bracing outlet/showcase for comics work that is focused on visual impact.  #5 is the first ALL full-color issue, yet it remains priced at the super-value price of $3.00 that held through the first four issues (all of which have full-color covers and centerfolds).  Artists featured in the latest issue include Benjamin Marra, Panayuitus Terzis, Michael DeForge and plenty more.  Previous issues feature such contributors as Al Columbia (whose amazing full color centerspread for #4 is worth the price of admission), Dame Darcy, Jason Overby, Aidan Koch, Blaise Larmee, Dunja Jankovic, Josh Simmons, Marko Turunen, Nathan Fox, Luke Ramsay and many, many others!  This newspaper is funded, at least in part, by a Kick Starter grant, which, presumably, enabled the full color printing.  Check these out!

This item belongs to the categories: Small Press Comics, Anthologies
This item is part of the series: Diamond Comics
You may also enjoy these related titles: