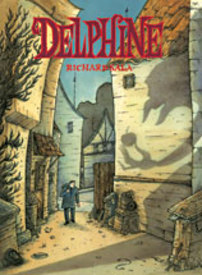 The two latest issues in the wonderful Ignatz series of Euro-American hybrid comics also happen to be two of the best -- and are only the second and third by Americans (the first being Ganges by Kevin Huizenga).  This series of high quality comic books/graphic albums features some of the finest regularly published comics work currently available and, by virtue of its periodical status, is both constantly giving us something to look forward to and bringing back the fun of collecting. Delphina presents the first installment of one of another of Richard Sala's trademarked tales of eerie mystery rendered in his unmistakable, angular pen and ink style.  This one concerns a clean-cut boy who, in search of his apple-cheeked girl, finds himself in a small town whose inhabitants... well, we don't want to give too much away.  Suffice it to say these are folk who put the strange in strangers, and you wouldn't want to have to depend on them.

This item is part of the series: Ignatz
You may also enjoy these related titles: