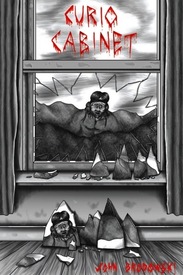 A long awaited new issue of this unclassifiable series if finally here.  The first four issues were self-published by Brodowski before being collected into a trade by the fine folks at Secret Acres, who have now assumed publishing duties on the series as well.  Secret Acres has put their weight behind this issue and as a result it has vastly improved production values.  Brodowski's work is surreal, presenting dreamlike narratives pulsating with an elusive intuitive internal logic that while palpable, remain ever just beyond the reader's grasp.  This issue features four stories, each of which confronts an often violent and/or militaristic masculinity from a particular – what can only be termed "Brodowskian" – angle.

This item belongs to the categories: Small Press Comics
This item is part of the series: Curio Cabinet
You may also enjoy these related titles: