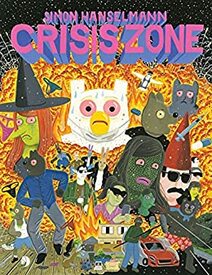 It's here!  You don't need us to tell you what this is about.  You already know that this oversize, full color, softcover volume collects the entirety of Simon Hanselmann's hugely popular Instagram series – that has already been heralded as the definitive comics accounting of the pandemic – plus quite a bit of extra art/panels/story that did NOT appear on Instagram, the reason being that Simon works on a twelve-panel grid, but Instagram limits posts to ten-panels. So, Simon, effectively, had to come up with two versions of each day's strip: one that worked in a ten panel sequence read one at a time, and one that worked in the full twelve-panel grid.  This, in and of itself is no small feat, and is a testimony to Hanselmann's strong comics chops.  Additionally, it is a variation on the (very) long running practice of newspaper cartoonists who produce syndicated Sunday pages, in that newspapers employ two different standard formats in printing them, depending – in large part – on page size of the newspaper, one which contains, roughly, the equivalent of two extra panels (although, in practice, this usually means one large panel).  Newspaper cartoonists usually insert a display panel here, rather than one – or two – panels that can be read as part of the narrative, as Simon has done.  Thus, Hanselmann emerges as comics champ!

This item belongs to the categories: Collections, Graphic Novel
You may also enjoy these related titles: