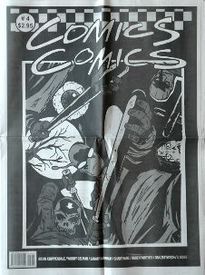 It'a about time!  The latest issue of the magazine of the comics cogniscenti is now in stock.  This issue's cover feature is the one and only Shaky Kane, whose amazing early 1990s work has been sadly neglected; until now!  Frank Santoro provides a heartfelt appreciation of Shaky's place in the comics universe and follows it up with a revealing interview.  And that's just for starters.  This issue also features:  "The Death of the Comic Book" by Sammy Harkham; An in-depth review of Steve Ditko's late works Avenging Mind and 160 Page Package by Tim Hodler who also reports on Dave Sim's recent dual release of Glamourpuss #1 and Judenhass as well as providing a close reading of Kentaro Miura's Berserk; Brian Chippendale writes on Brian Michael Bendis(!); the second major feature in this issue is on Woody Gelman, the hidden figure behind many of the Topps gum card series such as Mars Attacks, Funny Monsters and many, many others that have faded from memory (he also was instrumental in the creation of Bazooka Joe, threw some work R. Crumb's way when he was just starting out and served as a mentor to  Art Spiegelman); and to cap it all off are full page comics by designer, Mike Reddy and Copacetic fave, Dan Zettwoch (and don't forget, that when we're talking about Comics Comics full page means a whopping old old school 17" x 23"!).  Essential reading.