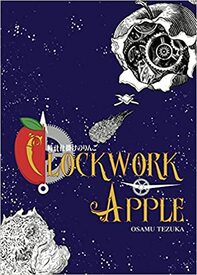 "Clockwork Apple" is the 62-page manga novella at the center of this 235 page collection.  As you might have guessed, the title was a riff on the Anthony Burgess novel Clowckwork Orange.  Tezuka states that at the time of its creation, he had not yet read the nove.  It was drawn in early 1970, several years before the Kubrick movie, so that doesn't have anything to do with it either.  He just liked the title!  In addition to "Clockwork Apple," there are seven additional short tales of Mystery, intrigue, suspense and science fiction.  All the stories in this collection were created for a variety of manga publications – prmarily Play Comics, Weekly Post and Young Comic – and were originally published between 1968 and 1973.

This item belongs to the categories: Collections, International
You may also enjoy these related titles: