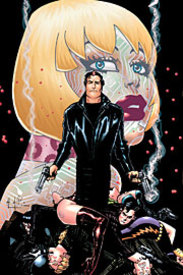 When Howard Chaykin stages a comeback, he stages a comeback!  After a decade of lackadaisical and dispirited meandering at the edges of comics, he is now back at center stage and busy -- make that very busy -- producing some of the best work of his long and storied career (now well into its fourth decade). Starting out of the gate with 2004's hardcover original graphic novel, Mighty Love -- described by Chaykin as The Shop Around the Corner in spandex -- he followed up in short order with his brutally satiric revisionist update of The Challengers of the Unknown, a six-issue mini-series, presumably soon to collected in a TPB.  And now we have his latest, The City of Tomorrow #1, the first issue of another six-issue series. In City of Tomorrow Chaykin is back doing what he does best, namely a science fiction saga set in a recognizably near future in which he gets to reflect on the current trends of today.  What we find is an amoral world driven by selfishness and the profit motive, where secret operatives hidden from the world at large carry out hidden agendas for the powerful.  Sound familiar?  It's too early in the series to determine exactly how it's going to play out, but it appears as though a central theme will be the moral hazard engendered by an over reliance on robots.  And as for his chops? Chaykin's back with his trademark: a sleek graphic-design savvy solidly welded to classic old school comics storytelling.  There are only so many pages in a comic book, and Chaykin doesn't want to waste any of them holding the reader's hand and walking him or her down well trod paths.  What you see on a page of Chaykin's work represents the tip of the iceberg.   There's an entire imaginative "berg" below the surface that is an accretion of a lifetime of comics sensibilities.  He trusts his readership to share with him a comprehension of generic conventions and an awareness of current events.  Chaykin isn't here to provide a palliative escapist fantasy that allows readers to retreat into a denial of the reality surrounding them.  Rather, he redeploys the archetypal heroic narrative to provide a caustic criticism of his chosen targets --  usually the myopic normative behavior dedicated to maintaining a corrupt status quo that he sees as dangerous to and damaging of a decent, civilized society -- and prod his readership's intelligence into a bit of critical thinking of it's own.  Chaykin's comics can be confusing to the uninitiated:  he produces narratives that are of an unsurpassed density and that involve much cross-cutting and parallel plotting.  Anyone not paying attention can quickly become lost.  Those willing to devote their fair share of focus and concentration will, however, find their efforts rewarded with an entertaining education in the ways of human nature and the underpinnings of our society.   In addition, there is the sheer aesthetic pleasure in experiencing a master ply his craft.  Long time Chaykin devotees will know that these are comics not to be missed; and to any readers of traditional genre based comics who have yet to experience Chaykin's work, all we have to say is:  now's a great time to check it out!!!