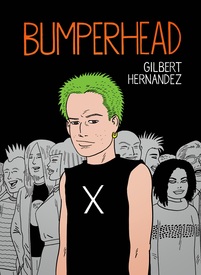 Gilbert's follow up to 2013's Marble Season, Bumperhead is another full-size, hardcover graphic novel from Drawn & Quarterly, but it is much more than just a follow up.  It's not going too far out on a limb to proclaim Bumperhead Gilbert's most fully realized work outside of the Love and Rockets continuity.  He is in the zone here, playing to his strengths as a storyteller and artist as he relates life events, group dynamics and family to character formation and the Hernandezian Arc of Life™.  It's almost magic the way Bumperhead's players are brought so vibrantly to life that the reader comes away feeling that they know the pen & ink people that populate this volume's pages, especially – and unsurprisingly – the girls/women (as they mature and age as well [or not, as seems to be the case with the character that seems to be intended as the manifestation of a Platonic ideal]).  Divided into five sections, Bumperhead provides a highly condensed (and intriguingly weighted) life story of a Mexican-American member of the generation that came of age during the punk music era, from childhood to middle age.  It is presented in a historical frame that roughly parallels that of Gilbert's own, with a focus on the musical evolution that took place in the early to mid-seventies rock from prog and glam to punk and hard core that is filled with band and LP references that will ring a bell in anyone conversant with the music of that era and/or Gilbert's own musical history and taste.  There are several unexpected/unusual twists – most notably a character who walks around with an iPad... in the 1970s!  This is a narrative device that takes a moment to get used to; it feels like Gilbert had the urge to do it and just went with it (you can almost hear him saying, "if they don't get it, fuck 'em") ... and he manages to pull it off as a sort of quasi-Brechtian chorus-like [Verfremdungseffekt] device to reference our contemporary consciousness. Like Marble Season, this is at most a semi-autobiographical work and most definitely not "the Gilbert Hernandez Story" (not even a roman à clef).  That said, it is nevertheless almost irresistible to attempt to tease out what is taken from Gilbert's own personal experiences and what is novelistic invention; in the process adding another layer of enjoyment for the long time fan; speaking of which, this is a book that is sure to resonate with and be savored (and treasured!) by the original generation of Love and Rockets readers, but is also one that can, of course, be easily enjoyed by any and all comics readers – especially those whose identities are inextricably entwined with their life's mix-tape soundtrack.  RECOMMENDED!

This item belongs to the categories: Gift Catalogue, Graphic Novel, Copacetic Select
You may also enjoy these related titles: