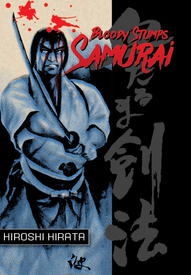 Here we have 144 of classic gekiga manga samurai action by the pioneering creator, Hirata Hiroshi.  Bloody Stumps Samurai was originally published way back in 1962, and was a highly controversial work at the time of its release – as Ryan Holmberg's in-depth, 18 page illustrated essay, "Hirata Hiroshi and the Buraku Question:  Understanding Bloody Stumps Samurai" explains, providing the critical perspective necessary to fully appreciate this work in its proper cultural and historical cultural context.  Kure Tomofusa's "The Bloody Stumps Samurai Incident" (translated by Holmberg) takes the reader back to the time of the book's release for a close up look of its initial reception  And, finally the book also includes the published apologies by Hirata and his publisher, written in reaction to the political firestorm the book unleashed.

This item belongs to the categories: Collections, Graphic Novel, International
You may also enjoy these related titles:

The Sky Is Blue with a Single Cloud

The Man Without Talent

The Pits of Hell