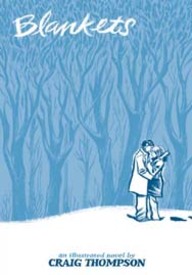 The tale Blankets tells is in most respects a classic coming of age story, but the place -- emotional as well as geographical -- that it is coming from may not be familiar territory for many readers:  an abnegating Christianity built on self-denial ensconced in the harsh northern environs of Wisconsin and Michigan.  Yet there can be no doubt that the core questions and values dealt with in Blankets are certainly universal ones.

Craig Thompson has clearly devoted himself to a serious study of Will Eisner's late work -- from A Contract With God to the present -- and this study has really paid off here.  The pacing, the placement of blacks, the expressive use of brush technique, and the close attention to the nuances of facial expression all exhibit great strength and serve as expertly formed buttresses to the story which he wants to share with us.  And lest there be any doubt on this account:  it is a story well worth sharing.  It is a story filled with many moving moments, each building upon one another -- almost imperceptibly at first -- before slowly but surely accumulating force, until, when you've finally finished the book and put it down, you realize that its made quite an impression, that is has bored more deeply into your consciousness than you had at first realized, and that now you have to deal with it.  Before you can put it to rest, you have to think about it, and you have to draw your own conclusions.   If you fail to make a conscious effort to come to terms with it, the spirit that inhabits Blankets will haunt you until you do.