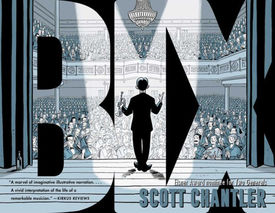 This 250 page, horizontally formatted, duo-tone hardcover delivers a nearly wordless comics biography of 1920s jazz pioneer, Bix Beiderbecke, who was among the first European-American musicians to grasp the revolutionary implications to music embodied in Louis Armstrong & Co.'s riffing improvisations.  An early musical prodigy, Beiderbecke was the child of a strict and inflexible (some might say, stubborn and pig-headed) German-American father (and, of course, a more indulgent and flexible mother) with whom Bix found himself constantly at odds: Bix's desires and evident destiny were not what his father had in mind.  This contentious relationship between son and father forms the backbone of the narrative upon which the body of the story told here depends.  Significantly, while there is occasional text present in the form of letters and telegrams, the only dialogue in the work takes place in the sequence between Bix and his sweetheart, Ruth.  The primary pleasure of this "text" is its wordlessness.  Chantler's dexterous sequencing of images manages to make the sketching out of an entire life story almost entirely in pictures look easy.  A rare treat.  Aren't hep to Bix?  Check out a solid sampling of his work, here.