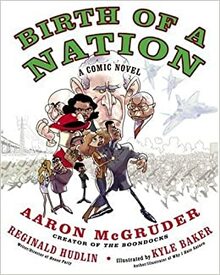 This wonderful political satire is now available in an attractive affordable softcover edition.  Here's what we had to say about the hardcover edition:  "This is hands down the most entertaining and insightful political satire to grow out of the mess that was the 2000 presidential election.  Check it out:  Fred Fredericks, idealistic mayor of East St. Louis, rallies his fellow citizens to the polls only to have them become the victims of a trumped up, bogus, mass disenfranchisement.  As a radical form of protest Fredericks -- with the assistance of  shady black billionaire and old friend, John Roberts -- decides to have East St. Louis secede from the union.  Roberts opens an "offshore" bank (albeit in the heart of the USA) et voilá East St. Louis becomes The Republic of Blackland, the new Switzerland!  Soon idealistic young militants, OPEC-funded hitmen, CIA operatives, tabloid reporters and AWOL black servicemen eager to protect and serve the new nation arrive in swarms.  As one might expect, problems arise almost immediately.  There's some real serious food for thought here, along with a love story, whacky antics, male bonding and more!  Highly recommended."  And here's a few other notable opinions the book has garnered since then:  "Birth of a Nation is the wickedly funny marriage of The Boondocks, House Party, and The Battle of Algiers.  Be prepared to laugh yourself silly while repeating over and over again -- 'how true.'" -- Julian Bond, chairman NAACP  "Birth of a Nation is a brilliant, biting and witty commentary on the chaos of the 2000 election.  Hudlin and McGruder have achieved that rarest of things: a political satire that is also an extremely important and moving work of literature, an achievement for any writer or any artist at any time.  Birth of a Nation is a unique event in the history of American literature." -- Henry Louis Gates, Jr.  "Reggie and Aaron are doing to comic books what Public Enemy and NWA did to the music business." -- Ice Cube  While we agree with all these comments we feel that Kyle Baker is not given the props he deserves:  for our money his is the greatest contribution of all.  I mean let's get real for a minute here:  after you've read this book, try imagining it drawn by Aaron McGruder himself; or, say, Denys Cowan, or Ho Che Anderson, or any of the other many talented African American cartoonists and comics artists out there – or any other artist, period, for that matter....  You can't.  Only Kyle could have pulled this one off.  So wise up people and give credit where credit is due!  Birth of a Nation is a masterpiece for our times.

NOW OUT OF PRINT - WE ONLY HAVE A FEW LEFT... GONE! (But we may have a few copies squirreled away somewhere and are looking for them, so please check back

How to Draw Stupid

The Bakers
A Right To Be Hostile: The Boondocks Treasury