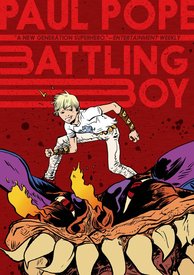 Well, here it is... finally.  Announced in 2007 for a fall 2008 release, and only now, in the fall of 2013, gfinally seeing the light of day, finishing Battling Boy has clearly been a a personal battle for Pope himself.  Published by First Second, Battling Boy is the first volume in a series clearly aimed at pre- and early adolescent readers, with a slant towards the male of the species.  While this is bound to be a disappointment for that segment of Pope's readers who have primarily connected with those aspects of his previous work which have dealt with more mature themes involving drugs and sexuality, long-time readers who were primarily attracted to his bold art and vividly expressive inking will find much to engage them here.  The commercial considerations of this project demanded a full color work with standard book dimensions, and while we here at Copacetic have generally favored Pope's work reproduced in such a way so as to play to his native strengths – on a larger scale and in black and white –  the coloring job turned in by Hilary Sycamore is finely nuanced and highly sympathetic to Pope's æsthetic (far more so than the coloring of Pope's work in the recent Image Comics collection).  The story told in Battling Boy is a shuffled deck of interlocking narratives that center on a boy descended from a godlike realm (think Asgard) who is the son of their champion (think Thor) who must prove himself in a rite of passage that takes place in the city of Arcopolis, a mythological urban center along the lines of an amalgamation of South American capital cities (think La Paz and Lima) that was formerly under the protection of the famed hero, Haggard West.  Also figuring prominently in the plot is West's daughter, Aurora.  The foes beseting Arcopolis are a bevy of monsters, rendered with clear relish and applomb by Pope as he expertly channels his childhood joy in drawing scary creatures (and by doing so recapitulates one of the book's central themes).  While there are narrative twists and turns aplenty, Pope sticks pretty closely to the standard young-adult-novel, rite-of-passage playbook. As a result, there won't be many surprises for seasoned readers well-acquainted with the genre, but the younger readers for whom this book was designed are sure to have a great time reading this highly engaging graphic novel that was created to connect with their still vital sense of wonder.  We hope for the sake of these same young readers that Pope has at last found firm footing for his continued work on this series, so that subsequent volumes arrive before they're too old to enjoy them.

This item belongs to the categories: Gift Catalogue, Graphic Novel, Kid Friendly
You may also enjoy these related titles: