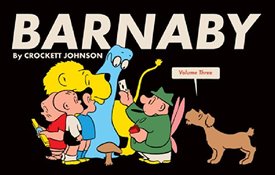 The oft' delayed and long awaited third volume of Crockett Johnson's classic one-of-a-kind strip has finally arrived!   Between these covers is collected all the strips published from 1 January 1946 through 31 December 1947by  Also on hand are a forward by Jeff Smith, an essay by Nathalie op de Beeck, "Notes on a Haunted Childhood," an afterword, "Escape Artist?" by Philip Nel – who also contributed notes to historically dated allusions that are peppered throughout the strips  – and, finally, early comics histgorian,  Coulton  Waugh's appreciation of Barnaby that originally appeared in The Comics, which was published in 1947.

This item belongs to the categories: Classic Comics Collections, Gift Catalogue, Kid Friendly
You may also enjoy these related titles: