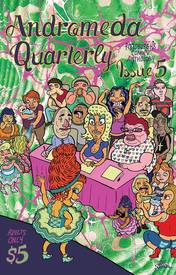 This time out we have 64 pages - more than half of which are full color - from a dozen creators hailing from right here in Pittsburgh and as far away as Serbia.  While unstated, this issue's theme appears to be that of separation and isolation.  Each of this issue's contributions refracts this theme through its creator's own unique artistic lens.  The two opening pieces strive to visualize internal psychological states through comics that fuse abstractions with representations.  These are followed by a nineteen page work by Alexander Mostov - the issue's longest - which details the exactions of an isolated existence. An illustration and an ad parody (concocted with Nick Vincenti) by the inimitable Nate NcDonough fill the middle two pages, followed by a Matt Harrison one-pager on toy transference. Steph Neary then provides a four page fantasia of being home alone before readers are given the opportunity to culturally translate four short takes on life's absurdities by Slavko Mali.  Aaron Ward's "Rave" demonstrates that even this supposedly most communal of experiences can be isolating on our age of internet gadgetry.  "Timmy and the Spare Tire", by Corey Ruffin provides a particularly bleak look at children left to their own devices in the great out of doors, and the issue closes out with a six page pencil-rendered piece on the danger of dependency.  It is worth noting that the majority of creators decided to let their comics speak for themselves and left their contributions untitled.  Edited by Andy Scott.  Cover by Lizzee Solomon.  Made in Pittsburgh!

This item belongs to the categories: Anthologies, Handmade, Small Press Comics, Made in Pittsburgh
This item is part of the series: Andromeda
You may also enjoy these related titles: