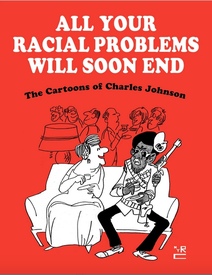 A hefty hardcover collection of the cartoons of Charles Johnson, All Your Racial Problems Will Soon End pulls together a disparate selection of Johnson's work, primarily from the 1960s & '70s, that have been out of print and rarely seen (outside the ranks of the cognoscenti) for over fifty years.  This is a great selection that helps make up for lost time.  Here's what the publisher, New York Review Comics, has to say about it:

"Before Charles Johnson found fame as a novelist and won the National Book Award for Middle Passage in 1991, he was a cartoonist, and a very good one. Taught via correspondence course by the comics editor Lawrence Lariar, mentored by the New Yorker cartoonist Charles Barsotti, and inspired by the call of the poet Amiri Baraka to celebrate and depict Black life in America, Johnson crafted some of the fiercest and funniest cartoons of the twentieth century.

This collection, Johnson’s first in nearly fifty years, brings together work from across his career: college newspaper gags, selections from his books Black Humor and Half-Past Nation Time, his unpublished manuscript Lumps in the Melting Pot, and uncollected pieces. Taken together, this volume reveals Johnson as long overdue for appreciation as a cartoonist of the first order."

This item belongs to the categories: Classic Comics Collections, Collections, Gift Catalogue
You may also enjoy these related titles: