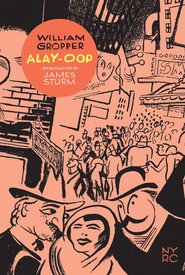 Gropper's 1930 classic is at long last once again available.  This sumptously produced new edition from the fine folks at NYRC is a handy-sized but heavy-duty hardcover that sports a cover designed by Sammy Harkham, starts off with an introduction by James Sturm and has Art Spiegelman singing its praises (see below) – so you know, with friends like these, that this is a worthy work, and that readers will be in for a special treat.

Here's what NYRC has to say about it:

William Gropper was one of the great American cartoonists and illustrators of the twentieth century. A student of George Bellows and Robert Henri, he was a prolific newspaper cartoonist, a WPA muralist, a Guggenheim recipient, and committed political activist—the first visual artist called before the House Un-American Activities Committee, after which he was blacklisted (though he got revenge with his pen).

He was also a master of visual storytelling, best seen in his only full-length narrative work, Alay-Oop. First published in 1930, just as Gropper was coming to the height of his powers, this lost classic of the graphic novel presents an unusual love triangle: two circus acrobats and the honey-tongued schemer who comes between them. In page after page of charming, wordless art, Gropper takes us from the big top to bustling New York streets, from a cramped tenement apartment to the shifting landscape of a dream, as his characters struggle with the conflicting demands of career, family, and romance. A timeless and surprisingly modern yarn—with backflips aplenty.

Now that ‘the graphic novel’ is no longer just a marketing euphemism for A Very Long Comic Book, I’ve begrudgingly come to terms with the term—especially since it allows anomalous treasures like William Gropper’s 1930 story in pictures a new chance to be discovered. Gropper, a founding editor of the New Masses, was probably the most revered left-wing American Political painter and cartoonist of his day, but the low-key love triangle at the heart of Alay-Oop has little to do with, say, the Triangle Shirtwaist Factory fire that killed Gropper’s aunt when he was a kid and helped radicalize him—and that surreal horse in the woman aerialist’s dream chapter has way more to do with Freud than with Marx. The book is a witty social realist graphic novel of life among working-class variety performers—or maybe it’s a graphic ballad, with its surface simplicity. But the story gains in depth on repeated viewing—and each viewing is a delight, as Gropper’s cartooning masterfully reveals character through expressive gestures in efficiently observed spaces. He tells his story with a bold, graceful, and athletic brush line—somehow both light and weighty—that soars and swings across the pages until the artist, and the woman at the center of this tale, land firmly on their feet.
—Art Spiegelman