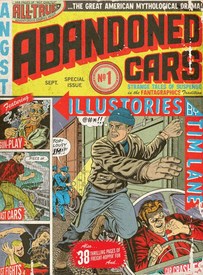 Here's another softcover edition of a previously released hardcover.  Tim Lane's Abandoned Cars is a hardboiled, hard-drawn, hard-livin' look at the underbelly of America that deserves a look, and the new, attention grabbing cover for the softcover works hard to get you to do just that.  We'll do our part by offering up this major league 16-page PDF preview.  And we also had a bit more to say about this one in our review of the hardcover edition, copies of which are still available!

This item belongs to the categories: Graphic Novel, Gift Catalogue, Collections
You may also enjoy these related titles: