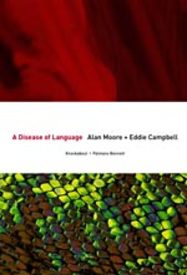 When this book first came in, it sold out before we had a chance to list it here, but now we've restocked and would like to bring your attention to this spiffy hardcover volume that collects several unique works reuniting the team that brought us From Hell, one of the most challenging graphic novels ever produced. The feature attractions here are the The Birth Caul and Snakes and Ladders. Both of these works originated as performance pieces (!) by Alan Moore that were then released as CD recordings. These CDs were then transcribed and transformed by Eddie Campbell, making for comics unlike anything you've ever seen. Supplementing these works are a lengthy interview with Alan Moore conducted by Eddie Campbell, and a set of preliminary drawings by Eddie Campbell for Snakes and Ladders. This work really deserves a look.

Alec: "The Years Have Pants" (A Life-Sized Omnibus) - hardcover edition

Alec: "The Years Have Pants" (A Life-Sized Omnibus)