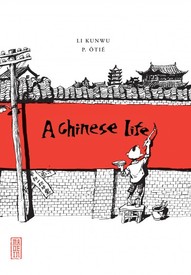 Here it is:  the first major graphic novel from The People's Republic of China to make it to our shores.  Actually a graphic autobiography (and a completed trilogy, at that) it tells the life story of Chinese artist – and Communist Party member – Li Kunwu, that takes readers from the dawn of the Republic in 1949 all the way up to the present day.  Originally published as three volumes in France (with support from the Institut Français) this 691 page work was the result of a close collaboration between the artist of the work, whose story is being told, Li Kunwu, and French Far East expert, writer, Philippe Ôtié, who helped organize and present the story in a form that western readers can both appreciate and understand.  Don't miss this opportunity to explore the history of communist China from the groundlevel view of an "everyman" participant whose artistic skills have enabled him to convey the story in graphic novel form.