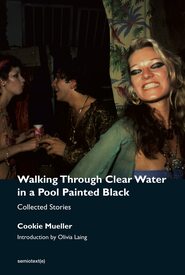 At long last we have a definitive collection of the work that flowed from the pen of the actress – most closely associated with John Waters – adventurer, "East Village raconteur," and lifelong writer, Cookie Mueller that finally captures a sense – and degree – of her literary output, which is greater than most people realize.  Thanks to the fine folks at Semiotext(e), we now have a handy edition that collects not only her titular 1990 anthology but also the cache of stories discovered by Amy Scholder that was published in the impossible to find Ask Dr. Mueller along with a bunch of her art and advice columns originally published in The East Village Other and Details Magazine.  Also included are a selection of stories seeing print for the very first time in these pages.  All for a very reasonable price.  Introduction by Olivia Laing.

"Cookie Mueller wrote like a lunatic Uncle Remus—spinning little stories from Hell that will make any reader laugh out loud. She was a writer, a mother, an outlaw, an actress, a fashion designer, a go-go dancer, a witch doctor, an art-hag, and above all, a goddess. Boy, do I miss that girl."

"She was like a woman in flames – like I'd never seen before.  Not just a beauty, but the freedom that she had about herself, like a comet going across the sky once in a century."

"People fall in love with Cookie when they read her stories (I loved her first!). As she did, the stories move through different worlds, from heavy drug use to writing a health column (at the same time); from go-go dancing to art criticism to film and theater acting, from boyfriends and girlfriends to S&M and marriage, etc., etc., etc. With Cookie there was no boundary between herself and her writings.  Which isn't to say she didn't work hard on her stories—she did, the same way she worked on her hair. She was a matchless beautician of the word."

AND,  there's a hefty preview available – HERE – for anyone who feels like digging in now.

This item belongs to the categories: Featured Item
Search Copacetic
Just in:
See all recent arrivals...
Copacetica
Edifiying essays about all things Copacetic