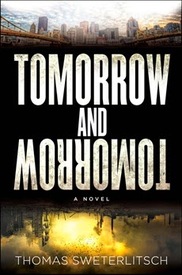 John Dominic Blaxton is an insurance investigator, a cross between Walter Neff (née Huff, in the novel) and Philip Marlowe, a hard luck case whose pregnant wife was killed, and he feels he should have been as well, and so is barely able to drown his sorrows.  While working on a claim, he stumbles on a dead body and finds himself caught up in a complex web of money, power, sex, religion and guerilla art.  Except... this is happening some thirty years or so in future, and nothing is what it seems.  The central irony of Tomorrow and Tomorrow, Pittsburgh author, Tom Sweterlitsch's debut novel, is that in order to "put Pittsburgh on the map" of literary locales, he had to completely annihilate it:  before the novel opens, Pittsburgh has been vaporized by a nuclear blast.  Then, through the course of the novel, and Blaxton's mission, a simulacra of the non-existent city is gradually (re)assembled out of "The Archive," the massive digital storage which, in the future posited here, contains the records of a nearly – but, crucially, not completely – total surveillance of every instant at every location in which every action of every person at every place at every time is recorded and stored.  Through this particular device, Sweterlitsch hits on a vital metaphor for the literary imagination itself – for what is writing but a replacing of reality with an imaginative construct built out of the materials of memory (this applies to film-making as well, and it will come as no surprise to anyone who reads this work that it has been optioned for a film, as the imaginative reconstruction that takes place in the pages of Tomorrow and Tomorrow is of a highly visual nature).  The plot of the novel turns on the twist that the memory out of which reality is recalled here is man-made:  The Archive.  As it is man-made, it can be man-unmade as well, and this is precisely what happens as the murder mystery at the core of the plot involves a hacking of The Archive that attempts to rewrite memory and hide the crime(s), echoing concepts explored in William Gibson's Neuromancer and Ridley Scott's Blade Runner (based on Philip K Dick's Do Androids Dream of Electric Sheep), which are now thirty years old and very much in need of the updating which they get here.  But there's more!  The digital recollection and subsequent reconstitution of the entire population of the annihilated city of Pittsburgh adds another – allegorical – layer.  Although unstated in the novel, employing the parlance of the present, The Archive storing the virtual afterlives of the dead would be located in "the cloud," which repository then becomes the simultaneous locus of both history and heaven, wherein the facts of the past can be accessed and lost loved ones revisited, and wrongs righted; or not.  Current and former residents of Pittsburgh will have the added bonus of finding aspects of their current (or former) environments reconstituted in these pages, as the human memory powering the novel draws on its own recollections of the city and its people.

This item belongs to the categories: Gift Catalogue, Made in Pittsburgh
Search Copacetic
Just in:
See all recent arrivals...
Copacetica
Edifiying essays about all things Copacetic