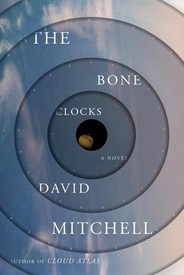 The Bone Clocks is a book into which Mitchell tries to squeeze in everything under the sun, and moon, and, especially, that which is under neither.  He opens up literature's bag of tricks and grabs everything he can carry.  He starts with the framework of a classic 19th century British novel – think George Eliot – and works in the likes of Philip Pullman's His Dark Materials trilogy, Twin Peaks, and Mai, the Psychic Girl, before delivering an action-packed, climactic denouement that is possibly the closest a work of prose has come to portraying a cosmic Marvel Comics superhero battle; roughly the equivalent of pitting Dr. Strange and the X-Men against Dormammu, Eternity and Magneto in the Dark Dimension (penciled by Steve Ditko in mid-60s but then shelved for twenty years and inked by Bill Sienkiewicz in the mid-80s).  The entire work is constructed in a series of Mitchell's trademarked, finely crafted first-person voices, each occupying their own temporal slot.  The overarching narrative is propulsive, but also meditative, and it is the meditative component that is the most compelling.  More than anything, The Bone Clocks is a work about the role of literature – all literatures:  secular, religious, fictive, scientific, mythological – in linking together mortal humans in an immortal chain of knowledge, wisdom and tradition that is made possible by the creation and implementation of symbolic systems, such as – one among many – the English language.  While each of us individually is destined to shuffle off this mortal coil, collectively we experience immortality through our interactions with the works of art and literature that withstand the tests of time, wherein we are immersed in a stream that is simultaneously connected to both the past and future.

NOW ON SALE AT A SPECIAL PRICE!